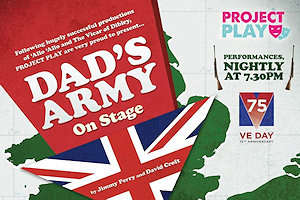 This amateur production of Dads Army is presented by special arrangement with SAMUEL FRENCH LTD a Concord Theatricals Company.
A great show that brings Dad's Army to the Octagon Stage!

More Information (Radio Ninesprings is not responsible for external websites)

As Project Play enters its third year, following superb productions of The Vicar of Dibley ‘Allo ‘Allo, this all-time favourite is sure to be yet another big

The classic BBC comedy series of the Home Guard of Walmington-on-Sea who battle daily against the Germans and local ARP Warden Hodges, comes to the stage complete with all the well-loved characters: “Stupid boy” Pike, “Dont panic, don’t panic” Jonesey, “Doomed, we’re all doomed!” Fraser, “May I be excused, sir?” Godfrey, and all under the command of the redoubtable Captain Mainwaring and his effacing deputy Sergeant Wilson. Three wonderful episodes, more side-splitting comedy and a nostalgic finale to boot!

A £1 ticket levy is included in all stated ticket prices.

More details for this venue

The event runs from 7:30am to 10:00pm on the following dates.
Select a date to add this event to your calendar app.