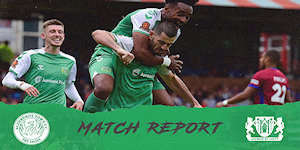 Joe Quigley’s double secured a first win of the season for Yeovil Town over Aldershot Town.

The Glovers number ten placed a cool finish beyond Mitch Walker to open the scoring, before being pegged back in the second half.

Late in the day, after Wilkinson was hauled down in the box, Quigley stepped up and expertly dispatched to ensure the three points returned to Somerset.

After starting with five at the back on Saturday, Darren Sarll changed shape to adopt a back four. This meant Dan Moss made his full debut at right-back, with Jordan Barnett on the opposite flank and in between them were Max Hunt and Luke Wilkinson who captained the side. Grant Smith began in goal.

There was a five-man midfield for Town, with Josh Staunton & Dale Gorman holding, whilst Charlie Wakefield, Sonny Blu Lo-Everton and Tom Knowles began further forward. Quigley led the line on his own.

Coming out the traps fast, Sarll’s side fashioned an opening after just two minutes. After an excellent driving run from Quigley, he played the ball into Gorman who later found Wakefield. The former Chelsea man beat his marker but had his effort saved.

Growing into the game, the hosts found routes beyond the Glovers midfield but struggled to get behind Hunt & Wilkinson.

After opening the scoring on Saturday, Quigley got in on the act once again in the 14th minute. Following an excellent battle for the ball, the Glovers number ten picked up the ball with only one thing on his mind, driving into the box and calmly placing the ball home.

Set-plays proved a threat for Yeovil Town all afternoon, and oner almost paid dividends on the half an hour mark. Barnett’s free-kick from an acute angle was met by Wilkinson who headed onto the bar.

Straight down the other end, Aldershot broke beyond the Town defence but an excellent save denied Agyepong.

A mix-up between Smith and Wilkinson almost sent the hosts clean through on goal again, but thankfully for the green and whites, the ball trickled wide.

In the closing stages of the half, the hosts looked dangerous and this only continued in the second. In the 53rd minute, Andrews got the wrong side of Wilkinson, but he blazed his effort well over the bar.

Looking for a second, Town had a great chance to find it just after the hour mark. Some excellent work from Quigley on the left flank once again as he found Yussuf, his tame effort was blocked but this led to a succession of efforts from the edge of the box, with Gorman eventually firing wide.

After holding firm during a long spell of possession, the hosts eventually levelled in the 71st minute through a wonderful header from Corie Andrews.

The goal seemed to spark the Glovers back into life, winning a penalty with ten minutes, with Wilkinson fouled following Gorman’s expertly weighted cross. Quigley stepped up, sent Walker the wrong way and hammered the green and whites into the lead.

Not sitting back on the advantage, Yeovil had more chances in the closing stages, the first falling to Quigley who really should’ve had a hat-trick, after rounding Walker, he could only find the side netting.

In the final embers of the game, substitute Adi Yussuf had a chance to settle the affair, but his effort was tame following Wakefield’s cross.

Ultimately a one-goal advantage was enough, as Yeovil secured a first victory of the season.