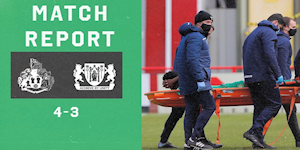 Yeovil Town were defeated by Altrincham in a topsy turvy encounter at Moss Lane.

After trailing 2-0 at half-time, Town battled back to be leading 3-2 in the second half thanks to goals from Emmanuel Sonupe, Joe Quigley & Charlie Lee.

However, the home side made the most of their stronger fitness levels, scoring twice late on to claim the points.

Darren Sarll made just one change to the side that started against Maidenhead United at Huish Park.

Adam Smith kept his place in goal, with Lawson D’Ath taking up an unfamiliar right-back role alongside Carl Dickinson, Billy Sass-Davies, and Michael Kelly in the back four.

Lee began in the midfield alongside Chris Dagnall, Neufville and Tom Knowles.

Reuben Reid returned to the side alongside Quigley.

With nothing to play for in wither camp, both sides looked to be forward-thinking, giving the 600 Altrincham fans in attendance something to enjoy.

However, spirits were dampened as Neufville seemingly had his season ended prematurely. After a long delay, so the Luton loanee could receive treatment, Neufville was stretchered off, with Sonupe on in his place.

Chances did fall for Yeovil, just moments after the restart, Kelly’s cross found Quigley who flicked the ball into the six-yard box, narrowly escaping Reid who was charging into the area.

Just moments later, Reid was involved in goalmouth action, hitting both posts after Knowles sent him through.

Hitting the post for the third time in the first 15 minutes, Quigley found shooting room for himself, striking the outside of the upright on the left-hand side of the box.
Despite the forward-thinking start from Town, it was Alty that struck first, capitalising on Yeovil’s inability to clear the ball through Connor Kirby in the 17th minute.

Not looking to be disheartened, the Glovers continued to press for an equaliser, with a heroic block from the hosts denying Lee’s diving header.

In the 31st minute, the hosts almost scored a carbon copy of their first goal, but this time the green and whites were eventually able to clear their lines.

Taking the onus upon himself, Lee burst beyond the Altrincham midfield and defence in the 34th minute but once faced with the goal, his left-footed effort was tame.

Due to Neufville’s injury, there was a lengthy period of added time, totalling eight minutes, time the hosts made the most of, doubling their advantage through Dan Mooney who glanced his header beyond A.Smith.

At the break, Yeovil only had themselves to blame, with a continued failure to capitalise on several clear-cut chances.

It was always going to take some brilliance to spark the Glovers back into life, and that came in the 56th minute as Sonupe pulled a goal back. After an excellent build up between Reid and Dagnall, Sonupe drove into the final third and rolled the ball into the bottom corner.

With the wind in Yeovil’s sails, Sarll’s side hunted for an equaliser, and in the 61st minute they were a matter of inches away from one when Reid played a well-weighted cross to the back post but the ball narrowly escaped Quigley who would have had a tap in.

After the ball narrowly escaped his clutches moments earlier, Quigley made no mistake in 69th minute. With the chance coming seemingly out of nothing, A.Smith found Quigley in acres of space. With the freedom of Moss Lane, the towering forward produced a deft finish to level the scoring.

Just three minutes later, Town had turned the game on its head, as a hobbling Lee produced a bullet header from Dickinson’s free-kick, silencing the vocal 600 supporters inside Moss Lane.

However, in the final ten minutes, those fans would have something to celebrate. Substitute Tom Peers turned the ball home after Altrincham played the ball across the Yeovil box.

The hosts’ winner came in a very similar fashion, as Josh Hancock poked the ball home beyond a stranded A.Smith, sealing the points and sending the Moss Lane faithful into raptures.

Ultimately it was a defeat for Town in the North-West, but it was difficult not to sympathise with the Glovers as they gave everything to get back into the game.