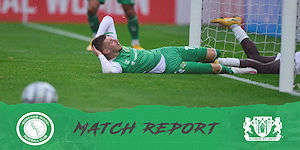 Ten-man Town fell to a defeat in Hertfordshire as Boreham Wood battled back from a goal down to secure a 2-1 victory.

Dale Gorman opened the scoring with his first Yeovil Town goal, delighting the 200+ away support, but it was just downhill from there for the Glovers with Boreham Wood equalising and Adi Yussuf receiving his marching orders.

The second half saw the Glovers enjoy their best chances, but it was the Wood that provided the sucker blow as Josh Rees netted the winner just before the hour mark.

Darren Sarll made two changes to the side which fell to a defeat against Chesterfield, this meant the injured Luke Wilkinson was replaced by Matt Worthington, with Josh Staunton slotting to the centre of defence and captaining the side. Grant Smith began in goal against his former club whilst Jordan Barnett and Dan Moss continued at full-back.

In the centre of the park, Worthington partnered Gorman, with Tom Knowles and Charlie Wakefield flanking them. Yussuf replaced Sonny Blu Lo-Everton in the starting team, joining Joe Quigley upfront.

The opening stages saw both sides look to settle, with Boreham Wood enjoying the longer spells of possession, but despite a lot of the ball, it was Yeovil that had the better openings.

Looking smart from set-plays, Barnett clipped the ball into Knowles’ feet in the tenth minute and he fired a trademark right-footed effort on goal but it took a number of deflections before flying wide.

In the 12th minute, the hosts forced an excellent reaction save from their former no.1 Smith. After the ball dropped kindly at the back post, Scott Boden was waiting but he couldn’t beat Smith. Moments later, Josh Staunton put in a heroic block from point-blank range to keep Town level.

Just three minutes later, the Glovers took the lead directly from a Gorman free-kick. Catching Nathan Ashmore off-guard, the Northern Irishman fired a driven effort which the Wood shot-stopper struggled to claim and rifled into the back of the net.

The goal sparked Boreham Wood into life, as they looked to claw their way back into the game, sending a number of deliveries into the box that Smith was able to punch away from danger.

On 25 minutes, the hosts found a way back into the game as Smith didn’t get the connection he wanted on his punch, and as the Town backline tried to clear their lines, the ball flew into the roof of the net.

Set-pieces were largely the chosen attacking route for both sides, but the Glovers did create a chance from open play just before the half an hour mark, Quigley and Yussuf combined well with the latter picking up the ball inside the box but the Glovers no.23 had his effort blocked.

Yeovil Town were the architects of their own downfall, as Yussuf was sent off for two largely needless yellow cards in the space of five minutes, creating an uphill task to earn a share of the spoils in Hertfordshire.

The Glovers were able to marshal their way through the end of the first half effectively, and in fact began the second half as the side in the ascendancy with Knowles going close on 57 minutes after he danced through the Boreham Wood defence, sending two defenders flying in the wrong direction, but his effort flew narrowly wide.

A real sucker punch, the hosts went up the other end and scored as Josh Rees poked the ball home after the ball was prodded down to him on the line.

Yeovil pushed for an equaliser right to the death, and on a number of occasions were extremely unlucky not to find one.

Knowles was the Glovers’ bright spark in the second half, he did excellently again in the 65th minute, cutting onto his weaker left foot but hammered an effort onto the outside of the post.

There was anguish expressed across the faces of all in Yeovil green on 70 minutes. After fantastic work from Quigley saw the no.10 burst through on-goal, he had his initial effort saved but the ball came back to his feet, he then squared the ball across goal looking for Knowles however the ball narrowly evaded him.

Town enjoyed more of the ball in the closing stages, but a clear-cut chance wouldn’t fall until stoppage time as Ashmore produced a heroic save. After Gorman’s initial effort was saved, Quigley connected with the rebound but an excellent reaction stop from Ashmore kept the hosts ahead.

In the dying embers, Knowles tried his luck from distance with a stinging effort, but once again Ashmore was the villain from a Yeovil perspective, stooping the ball on its way to goal.

Yeovil Town will have to wait just over a week to right this wrong, with Maidenhead United visiting Huish Park on the 5th of October.