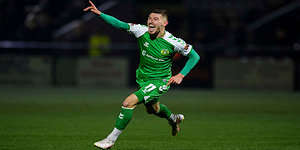 Yeovil Town’s unbeaten run continued at the expense of Bromley who just couldn’t match the work ethic of the Glovers in South London.

Two stunning goals from Tom Knowles and Charlie Wakefield will be the ever-lasting memory for Yeovil fans, but it was a heroic performance at the back, with Yeovil seemingly first to every second ball.

Darren Sarll was forced to make one change to the side which beat Dagenham & Redbridge, with Dale Gorman suspended, Sonny Blu Lo-Everton returned to the fold. Joe Quigley was a notable absentee from the substitutes bench.

Looking to make his opportunity count, Lo-Everton had Town’s first effort on goal in the eighth minute. After working the ball around well, the Watford loanee worked room for himself on the edge of the box and fired into Cousins’ gloves.

Surprisingly the Bromley defence often allowed Yeovil room at the edge of the box, and it did not take long for Knowles to capitalise on this. Following excellent pressure from Lo-Everton, former Glover Omar Sowumni lost the ball to Knowles who hammered the ball into the bottom corner from 20-yards-out.

The goal woke the hosts up, with George Alexander a continued thorn in the Yeovil side. On the half-hour mark, he saw the ball fly narrowly wide after getting a knick on Sowumni’s flick-on.

With just minutes of the half remaining, the hosts were given a golden opportunity to level from the spot after a push in the box. Cheek stepped up and emphatically placed the ball into the top corner.

Not deflated by the equaliser, Town thrust the game straight back onto Bromley. A long ball from Smith was brought down by Wakefield who found himself with similar space to what Knowles had for the first goal, and just like his opposite winger, he beat Cousins all ends up to give Sarll’s side a deserved lead at the break.

Not sitting on their advantage, Yeovil were the side that looked most likely to score in the early stages of the second half.

As the game grew on, the hosts began to pile on the pressure, but only forced one save from Grant Smith, who acrobatically clawed the ball out the goal following a Bromley corner.

Ultimately, it was a thoroughly deserved victory for Yeovil, who ended Bromley’s unbeaten run on their patch.