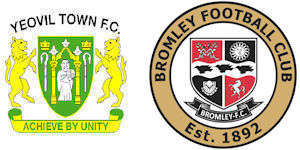 Andrew Oluwabori’s first Yeovil Town goal was only a consolation as Bromley beat the Glovers 4-1 at Hayes Lane.

Despite creating a number of chances, the hosts showed a clinical edge to claim three points.

There wasn’t a starting place for either of Yeovil’s new signings, with both Charlie Cooper and Jordan Young named on the bench.

The side took a similar look to the one that faced Torquay United in the second half, with the boss naming a back three, including Matt Worthington at wing-back. After extending his loan spell, Oluwabori occupied an attacking position from the start.

After an injury break within the first few minutes, it was Bromley who switched on first and took the lead with nine minutes played. A shot from distance by Louis Dennis took a cruel deflection, leaving Grant Smith stranded.

The goal didn’t really wake Yeovil up either, with Bromley going close after a corner kick on 12 minutes.

Town’s first effort came in the 22nd minute. After Worthington was moved centrally, he found Oluwabori who fired well wide from distance.

This finally sparked the Glovers into life. Maguire-Drew forced Reice Charles-Cook into an excellent stop after he was picked out at the back-post by Richards-Everton and sent a header toward the goal.

After a positive spell, Yeovil were dealt a sucker punch after Bromley added a second following a well-worked corner as Beast Topalloj tucked the ball home.

Cooper’s side did have chances to pull a goal back, the best fell to Oluwabori who sent his shot wide of the post after being sent clean through.

Things didn’t get much better for Yeovil in the second half as the game continued in a frustrating manner. After having a goal ruled out for offside, Cooper’s side were dealt a killer blow as Bromley went up the other end and added a third.

Not giving up, Oluwabori did add a consolation after great work from Alex Fisher and Jordan Maguire-Drew with 66 minutes played. It might’ve been more than just a consolation had Jamie Reckord converted with his back-post header a matter of moments later.

Attacking changes followed as the game became stretched. These changes saw Young make his Yeovil Town debut, and he was the next to fire on goal, with an effort that ultimately did little to test the Bromley ‘keeper Charles-Cook.

Bromley wrapped the game up with three minutes left to play through Corey Whitely, adding salt to the wounds.

Attention for the Glovers now turns to a trip to Barnet on Tuesday night.