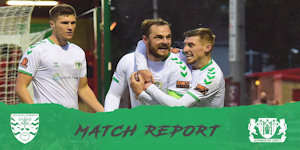 Yeovil Town held firm to secure a tight victory on the road against Dagenham & Redbridge.

Paul McCallum’s first half stoppage time own goal was the difference for the Glovers, but Yeovil utterly deserved their lead.

Despite being reduced to ten men, Dagenham threw the kitchen sink at Town, but the backline held firm to keep a clean sheet against the league’s top scorers at home.

Darren Sarll opted for an unchanged eleven after a victory against Eastleigh last time out. This meant skipper Luke Wilkinson and Josh Staunton lined up against their former side. However, Joe Quigley who is also formerly a Dagger had to settle for a substitutes birth with Adi Yussuf leading the line.

Picking up where they left against Eastleigh, Town began on the front foot, Charlie Wakefield burst behind the Daggers’ defence, and after being bundled down in the area, the referee remained unmoved.

Continuing on the front foot, after a misjudged header from a Dagenham defender, Wakefield was clean through but his effort only found Elliot Justham’s gloves.

The hosts grew into the game, but in truth did little to offer goal threat, being restricted to headers from set-pieces.

In the closing stages of the half, Yeovil Town ended in the ascendency and got their just rewards. Tom Knowles’ long-throw evaded everyone and as Paul McCallum adjusted to clear, he flicked the ball beyond Justham to give Town the lead.

With just seconds to go in half, Elliott Johnson received his marching orders for a heavy challenge on Knowles.

The second half saw Town start brightly once again. An incisive breakaway in the 52nd minute freed Knowles who forced a corner with his driven effort.

Ten minutes later, Wakefield found his opposite winger Knowles who hammered an effort goalbound, forcing a save from Justham.

As the half grew on, Dagenham began chasing the game. In the 73rd minute, McCallum found room and rose highest at the back post, but his header did little to trouble Grant Smith.

However, despite lumping the ball into the box on every occasion, Grant Smith was rarely tested with Max Hunt and Luke Wilkinson heading almost every ball out of the box.

It was that defensive resilience that saw the Glovers through to a hard-fought victory on the road.