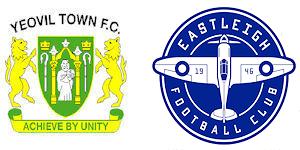 Yeovil Town picked up a point on the road against Eastleigh in a very wet Silverlake Stadium.

Sam Pearson ignited the game with his early goal, but it was the hosts who really set the tempo throughout.

J.J. McKiernan’s second-half goal levelled the affair, and despite being reduced to ten late on, secured them a point which was ultimately a fair reflection of the game.

Chris Hargreaves opted for three changes to the Yeovil side which lost to York. AFC Bournemouth loanee Owen Bevan made his debut at centre back, whilst Matt Worthington returned from injury in the midfield. Pearson started on the wing in his first start after a back injury.

Having struggled to take their chances in previous fixtures, the Glovers were clinical at the first attempt on Tuesday night. Pearson netted his first goal for Town on seven minutes after Malachi Linton pounced on the ball and found the Bristol City loanee who produced an excellent finish.

The goal sparked the hosts into life, who mounted a vast amount of pressure on Grant Smith’s goal.

It was former Glover Tristan Abrahams who looked most likely to score in the first half for Eastleigh, forcing saves from our no.1 on three occasions.

At the other end, Linton and Charlie Wakefield both had shooting chances for the Glovers, but neither did enough to test Joe McDonell in net for the Spitfires.

The second half saw Eastleigh up their intensity. With 67 minutes on the clock, Charlie Carter and John Oyenuga had shots that flew just over the bar as the Spitfires came ever closer to a leveller.

Less than ten minutes later, the hosts found the leveller through McKiernan, who drove through the Town defence and fired beyond Smith to set up a nervy finish.

Eastleigh maintained their pressure, causing a number of scrambles in the penalty area, but the Glovers defence stood firm, clearing their lines on a number of occasions.

Late in the day, former Weymouth man Brennan Camp was sent off for an overzealous challenge on D’Ath. With just a matter of moments to play, the sending-off had little bearing on the result.

Next up for the Glovers is a home clash against league leaders Chesterfield on Saturday afternoon (3 pm).