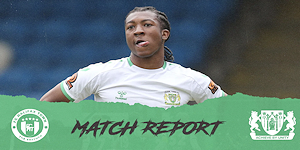 Yeovil Town fell to a narrow 1-0 defeat against FC Halifax Town at the Shay.

After defending resolutely for 80 minutes against the promotion hopefuls, the Shaymen netted with less than ten minutes remaining.

The Glovers did create chances of their own, but were ultimately left North Yorkshire disappointed.

Charlie Lee opted for an unchanged side from Yeovil Town’s victory against Stockport. This meant Max Hunt remained at the centre of defence despite Ben Barclay’s return to availability.

Similar to the Stockport game, Yeovil were happy to allow their promotion hopeful hosts to enjoy a lot of the ball. However, Halifax were able to work more routes to goal than the Hatters.

With six minutes played, Halifax would count themselves unlucky not to be ahead. Former Glover Matt Warburton fired from distance forcing a parried save from Grant Smith. The ball then dropped kindly to a Jordan Slew, but a heroic block from Morgan Williams kept the score level.

The Shaymen proved intelligent in the attack, finding routes in behind, particularly in the wide areas, but when the ball reached the box, the finishing touch was lacking in the first half, particularly from Billy Waters, who spurned a golden chance with 23 minutes on the clock.

Just moments later, Yeovil were denied two penalty claims within the space of a minute. Firstly on Jordan Barnett who was deemed to go down too easily as he possessed the ball on the left. Then, far more blatantly, Reuben Reid was bodychecked as he brought the ball down, but the referee was left unmoved.

The closing stages saw the Glovers really grow into the game, with Yeovil going the closest in the 44th minute. Luton loanee Josh Neufville picked up the ball with 25-years to goal, but with no passes on, he struck the ball beautifully but struck the crossbar.

In comparison to the first half, the second was played at a remarkably slower pace, with neither side really testing the goalkeeper.

Halifax were the side controlling the flow of the game, and it took the 15 minutes to fashion a goalscoring opportunity. After Jerome Slew found Billy Waters who had his effort heroically blocked by Wilkinson.

Despite looking dangerous on the counter, particularly through Neufville, the hosts did start to turn the screw. Waters who was a continued thorn in the Glover's side should’ve done better when he drifted to the back post and fired on goal with a first time effort with 15 to go.

With 83 minutes on the clock, Halifax struck the winner. Substitute Zak Dearnley was first to react in the box to slot the ball home and sent the Shay into rapturous celebrations.

Yeovil did press in the closing stages, but ultimately it wasn’t meant to be as the Glovers left North Yorkshire empty-handed.