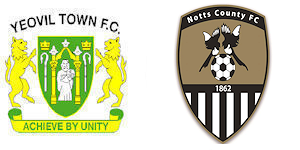 A resolute performance on the road from Yeovil Town secured a hard-earned point against league leaders Notts County.

Despite being under pressure for vast periods of the game, the Glover's defence stood firm throughout.

Although Mark Cooper’s side left the County goalkeeper largely untested, the superb defensive display meant Yeovil were good value for their point.

Cooper switched to a back three for the trip to the league leaders. Grant Smith remained in goal, whilst Morgan Williams returned to the side alongside Owen Bevan and Max Hunt. Jamie Reckord and Chiori Johnson began in the wing-back roles.

Josh Staunton survived an injury scare to make the starting line-up in midfield alongside Matt Worthington and Jamie Andrews. After his double against Gateshead, Alex Fisher led the line with Peterborough loanee Andrew Oluwabori.

Full of confidence at the top of the table, Notts County were on top in the first half, forcing the Glovers into countless saves and blocks.

It took just three minutes for Smith to be called into action. National League top scorer Macaulay Langstaff’s strike from inside the box was well-hit but saved by Smith at the second attempt.

Bevan was often the hero at the back for the Glovers, throwing his body on the line on multiple occasions to deny both Langstaff and Cedwyn Scott for Notts County.

Yeovil’s bright spark in the first half was Oluwabori, who had Yeovil’s first attempt with 25 minutes played. The Peterborough youngster hit the Magpies on the break and after busting beyond his marker, he sent his strike over the bar.

With Yeovil marshaling County well, they were left frustrated with shots from distance late on in the first half. Ruben Rodrigues tried his luck from distance, but via a Smith save and Williams’ defending, Yeovil were able to survive the danger.

The second half saw Yeovil start on the front foot. With just a minute of the half played, the ball was played to Fisher inside the box, who attempted an audacious flick that was well blocked by the hosts.

However, the hosts grew into the half once again, restricting Cooper’s side to attacks on the break.

Despite the pressure, Yeovil continued to stand firm, once again frustrating and forcing the hosts into shots from distance.

Substitute Malachi Linton looked bright when he came on, but often struggled to get the ball out his feet to drive towards the County goal.

In the end, it was a well-earned point for the Glovers who showed real togetherness throughout.