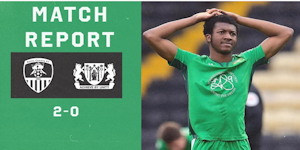 Yeovil Town suffered defeat on the road at Meadow Lane as Notts County were the 2-0 victors.

Two stunning strikes in the closing stages of each half separated the sides as the hosts managed the game effectively throughout.

For Town, the biggest worry will be the hamstring injury to Rhys Murphy who limped off during the second half.

There were three changes for Yeovil Town following Tuesday’s defeat to Bromley at Huish Park.

Bradley’s absence forced Josh Neufville into an unfamiliar right-back role, alongside him in the defence started Max Hunt, Billy Sass Davies and Carl Dickinson who captained the side, Adam Smith began in goal behind them.

J.Smith returned to the base of the diamond with Knowles and Matt Worthington in the wider roles, Albi Skendi began at the tip of the diamond.

Reid returned to the starting line-up to partner Murphy.

It took both sides a while to get going in the fixture, with very few incisive attacks breaking down either defence throughout the fixture.

The game began in a rather scrappy manner in truth, with that characterised by Knowles receiving a yellow card for getting an elbow to the face in the 10th minute.

It took until the 22nd minute for the first real opening of the afternoon, which fell to Notts County’s Jake Reeves. The ball dropped kindly for the Magpies number four at the edge of the box but A.Smith was equal to his effort, palming it over the bar.

Town’s best piece of play came in the 33rd minute; Skendi did excellently to beat two Notts County defenders, he then played the ball into Reid's path who couldn't quite get the ball out from under his feet to test Sam Slocombe, an attack which largely showcased the green and whites lack of cutting edge in Nottingham.

Comparatively, Notts seemed to have that extra bit of quality in front of goal which saw the hosts strike ahead on 40 minutes. Reeves’ free-kick from around 35-yards flew into the top corner to leave A.Smith stranded.

At the break, Notts may have felt fortunate to be ahead with very little in terms of the ebb and flow of the game.

The second half was played in a similar manner to the first, with the Magpies midfield effectively dictating the tempo of the game in their favour.

An already disappointing afternoon became even worse as top scorer Murphy hobbled off with a hamstring injury.

On 78 minutes, the hosts were able to double their advantage in similarly spectacular style, a sublime first-time strike from wide-man Jordan Barnett powered the ball through bodies and into the back of the net, essentially killing the game as a contest.

One final chance did fall to Town as the game entered stoppage time, with substitute Chris Dagnall firing into Slocombe’s gloves, but ultimately it was too little, too late with the Glovers falling to a defeat on the road.