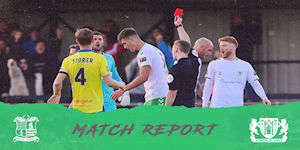 Yeovil Town were held by Solihull Moors in a heated affair at Damson Park.

After a relatively tame first half, the game burst into life in the second with a red card for both sides. Jordan Cranston was sent off for the hosts for violent conduct after he lashed out at Tom Knowles, but less than ten minutes later, Max Hunt was given his marching orders for a last-man foul.

In the closing stages, the hosts searched for the lead, but the Glovers were resolute and held firm to earn a hard-fought point on the road.

After a positive showing against Woking, Darren Sarll opted for an unchanged team, with Adi Yussuf leading the line against his former employers.

That meant on the bench there was a return from injury for Alex Bradley who has sat out in recent weeks, whilst Luke Wilkinson who was suggested could be able for the fixture missed out.

Looking to start on the front foot once again, Yeovil were able to enjoy a significant amount of possession throughout the opening five minutes but struggled to create any clear-cut openings.

However, the same could be said for the hosts, who did little to test Grant Smith throughout the first half.

It took 13 minutes for Town to create an opening, Yussuf did excellently after bringing down Moss’ cross, taking the ball under control and pushing it into Jordan Barnett’s path who fired first time and saw his effort fly narrowly over the bar.

Set-pieces were the order of the day for the Moors, and on 20 minutes Neil Ardley’s side had their best chance of the half, as James Ball snuck through the Glovers’ defence and latched on the end of a Cranston’s set-piece, but his header flew over the bar.

After a rather flat period, Town burst into life in the closing stages of the half. With less than five minutes to play, Yussuf tried to bend one from the edge of the area and after the ball to a knick, it dropped sharply and fell a matter of inches wide.

Deep into first-half stoppage time, Yussuf should’ve opened the scoring for Yeovil. Dale Gorman’s corner was floated over the goalkeeper to the former Solihull man who, despite being unmarked, saw his header fly over the bar.

The second half was a far more heated affair, and tempers came to a boiling point just after the hour mark. Cranston was given his marching orders by the referee for needlessly lashing out at Knowles whilst the Yeovil no.11 went to take a throw-in.

With the numerical advantage, Town looked to make Solihull pay, leading to frustration within the hosts’ camp. James Ball was lucky not to be sent off himself for afters with Gorman.

However, less than ten minutes after Cranston was sent off, it was a level playing field once again as Andy Dallas was fouled by Max Hunt as he burst through on goal.

With eight games in the month of October, the ten men of Yeovil Town looked fatigued but still managed to head away every ball that came their way.

Feeding off scraps, substitute Joe Quigley almost snatched a winner with ten minutes to go as he worked room for himself in the left channel, drove into the box and forced Ryan Boot into a save.

That was the best it got for Yeovil, who were penned back in their half for the remaining time. Yet, for all the hosts’ possession, they were unable to find a route to goal as the young defence of Dan Moss, Jack Robinson, Josh Staunton & Jordan Barnett dug deep to secure a point on the road for Yeovil.