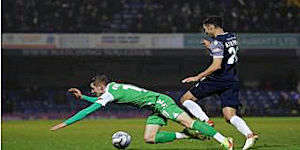 Yeovil Town fell to a disappointing 2-1 defeat at Southend United on Tuesday evening.

Goals in both halves built a comfortable lead for the Blues, with Reuben Reid pulling a goal back in stoppage time.

The result means Yeovil Town are still without a win since the turn of the year, falling to four defeats on the bounce.

After what was a tiring performance on Saturday against Bournemouth, Darren Sarll made four changes to his FA Cup eleven. Grant Smith, having served his suspension, started in goal, Jordan Barnett returned to his familiar left-back role, with Morgan Williams missing out.

Sonny Blu Lo-Everton replaced Matt Worthington who sat out due to illness, whilst Adi Yussuf returned to lead the line.

Starting fast has been something Town have become effective at this campaign, but that wasn’t the case at Roots Hall, with the hosts dictating play throughout the first half.

Although it took a while for chances to fall, the Blues took them when they did as Jason Demitrou opened the scoring on the half an hour mark, with the Southend captain's shot deflecting off Jordan Barnett and looping into the top corner.

The 80 travelling supporters had to wait 35 minutes to see the Glovers test Steve Arnold in goal for Southend, but when Yussuf forced a strong save from him, he was adjudged to be offside by the officials.

At the break, the hosts held a deserved lead and continued to look for a second in the opening stages of the second half.

Despite attacking changes from Yeovil a matter of moments earlier, Southend added a second through Tom Clifford who poked home almost on the goal-line.

With substitutes Joe Quigley and Reid on the pitch, the Glovers did finally have an outlet, but it took until the final fifteen minutes for them to be utilised effectively.

In the 85th minute, Yeovil thought they had pulled one back through Max Hunt, but a handball in the build-up to his effort saw the goal ruled out.

However, a matter of moments before stoppage time, Reid handed Town a lifeline as he reacted first to Arnold’s save to poke the ball home and set up a grandstand finish.

This exciting finish was played with Yeovil down to ten as Luke Wilkinson limped off in the moments following the goal, with Darren Sarll commenting post-match that he expects the defender to be out for six weeks.

In the dying embers, the green and whites launched the ball into the box on multiple occasions looking for Quigley and Reid, but ultimately the Shrimpers stood firm to earn three points on the balance of play they deserved.