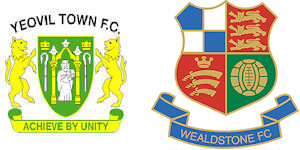 The Glovers failed to secure their second win in succession and capitalise on Lewis Kinsella’s early red card.

Although ending the bank holiday unbeaten, Yeovil fans will be frustrated they couldn’t make the extra man pay.

Chris Hargreaves made just one change from Saturday’s win against Dagenham & Redbridge, as 20-year-old Sam Perry returned to the starting line-up in place of the injured Lawson D’Ath.

The Glovers began positively and had added incentive as Kinsella saw red after kicking Linton following a challenge with less than ten minutes played.

Wealdstone continued to hold possession early on, looking compact when the Glovers had the ball and containing the away side.

It took until the 30-minute mark for Yeovil’s first clear chance of the game as Matty Worthington’s corner was met by the right foot of Ben Richards-Everton, which was headed off the line by Max Kretzchmar.

Yeovil began to cause Wealdstone more problems before half-time, Jamie Reckord delivered a low cross towards Alex Fisher who was unable to find the target before Morgan Williams tested Stones goalkeeper Sam Howes with an audacious cross-cum-shot.

Reckord then had a sight of goal himself, hitting a well-measured volley which just curved wide of the far post.

Yeovil began the second half strongly, another Worthington corner found Richards-Everton and he was only able to head directly at Howes.

The Glovers looked at their most dangerous from corners, another Worthington cross was met by Fisher at the near-post and was cleared off the line by Wealdstone again.

It finally looked like Yeovil were going to break the deadlock halfway through the second half as Howes brought down Linton in the penalty box, but Linton’s spot-kick missed the target and was fired high over the bar.

The penalty miss seemed to suck the life out of the away side, who could not find their earlier rhythm before the game fizzled out to a goalless draw.