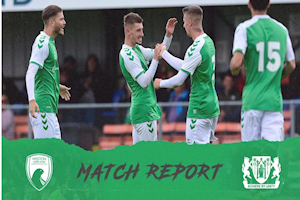 Yeovil Town were held to a 1-1 draw in an afternoon which was marred by an injury to forward Reuben Reid.

After going down unchallenged, Reid was substituted in the second half and looked in real pain as he made his way back to the changing room.

After going behind, Darren Sarll's side showed real character to fight back, with Tom Knowles netting with ten minutes left to play.

Town began the brighter of the two sides and tested Luke Purnell within one minute. Trialist A worked room at the edge of the area for a shot, but his effort took a deflection and was claimed well by Purnell.

Continuing to apply the pressure, quick-thinking from Knowles released Quigley through on goal with his throw-in, but the towering frontman saw his effort hit the side-netting.

Growing into the game, Weston had their fair share of chances too. With the ball bouncing awkwardly in the six-yard box, the green and whites required a heroic block from Josh Staunton to remain level.

More chances followed, with two coming in almost identical fashion, working space behind Town's full-backs on either side before dragging the ball wide of Grant Smith's goal.

Regaining a foothold on the game, Reid was inches away from opening the scoring. After the Glovers number nine worked space for himself inside the box, he cut onto his left foot and fired narrowly over the bar.

The biggest chance of the half fell a minute before the break. Excellent pressure from Reid saw the ball spin in Quigley's direction but brave goalkeeping from Purnell thwarted Town's efforts.

After the break, Town enjoyed a lot of the ball but lacked the cutting edge to force any chances.

Making the most of their chances, the hosts found themselves in front on 53 minutes. A spectacular free-kick from Grubb left Smith with no chance as it nestled into the top corner.

With work to do, the task got even harder for Town as captain for the afternoon Reid went down unchallenged, clutching his leg and forced into a substitution. The forward left the pitch assisted by the club physio and could spend a lengthy spell on the sidelines.

Looking for an opening, Hunt went close from a set-piece once again as Jordan Barnett picked out the 6-foot-6 defender.

With just ten minutes left to play, Knowles took the onus upon himself to drag Town level, firing from 25-yards out and leaving Purnell helpless as the ball was rifled into the top corner.

In the closing stages, Yeovil hunted for a winner, but the chances didn't quite fall as the friendly clash ended level.