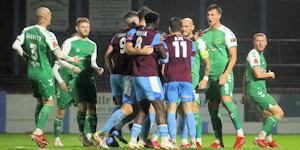 Yeovil Town were held to a goalless draw by Weymouth at the Bob Lucas Stadium on Bank Holiday Monday.

It was a game where neither team really got going creatively, with both goalkeepers seldom tested throughout.

The Glovers did look to turn the screw in the second half but a killer instinct in front of goal was lacking as Charlie Lee’s side drew for the third time in four National League games.

Interim manager Lee made two changes to the side which was defeated by Aldershot; Lawson D’Ath and Morgan Williams returned to the fold, with Sonny Blu Lo-Everton and Alex Bradley making way. These changes saw Jordan Barnett pushed forward into a midfield role.

Despite a bumper crowd that included 1,250 away supporters, the fixture never caught alight in the first half, with neither goalkeeper particularly tested throughout.

Town’s sole shot on target fell to Mark Little who met Dale Gorman’s free-kick, and directed his header goal-bound but didn’t have enough power on it to beat Ross Fitzsimons.

At the other end, the Terras did put the ball in the back of the net twice, but both goals were ruled out for offside by the linesman.

The second half saw Town begin with far more vigour, creating a chance from kick-off. Knowles was released down the right channel by Lawson D’Ath, he then drove into the box and forced a save from Fitzsimons with his driven strike.

At the other end, chances did fall for the Terras too, the best for Brad Ash after the ball broke loose in the box, but Grant Smith did excellently to smother his poked effort.

Yeovil’s best chance of the afternoon fell with 15 minutes remaining. Reid played the ball to Barnett who was lurking at the back post unmarked, however, he couldn’t direct his header on target.

In the closing stages, substitutions made an impact for Town as it was one-way traffic. Adi Yussuf did excellently to beat his marker and workroom in the box, but his deflected cross narrowly evaded Lo-Everton.

From the resulting corner, Town won a free-kick at the edge of the box, which would be the last kick of the game. Skipper Luke Wilkinson stepped up but he was unable to beat the wall.

As the ball was cleared, the referee blew the final whistle in what was a fiercely contested derby clash.