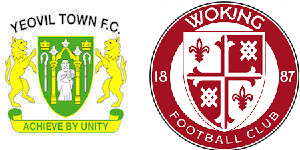 Yeovil Town fell to a narrow 1-0 defeat at the hands of Woking on Tuesday evening.

Padraig Amon’s late goal after missing a penalty secured three points for Darren Sarll’s side as the Glovers were frustrated in Surrey.

Mark Cooper made three changes to the side which was held by Maidstone on Saturday afternoon. Chiori Johnson returned to the fold, whilst Jamie Andrews made his first start in the midfield. Jamie Reckord returned from suspension to complete the changes.

In truth, the first half was a timid affair, with the wet conditions playing their part, with a number of players falling victim to slips in the opening stages.

It took 14 minutes for either side to fashion a shooting opportunity. Jahmari Clarke’s tame effort from the edge of the box gave Grant Smith an easy first save of the evening.

That was really the best it got from both sides in the first half, as both defences defended crosses well.

The early stages of the second half saw Woking come out on the front foot, and with 54 minutes played they carved the Glovers open, but Amond missed his one-on-one chance.

Minutes later, Amond missed a golden chance, this time from the penalty spot after a foul from Bevan in the box. Smith guessed correctly, going down to his left to claim the spot kick.

Yeovil began to grow into the game, but Craig Ross remained largely untested throughout.

However, late in their day, Woking did find a winner through Amond, who snuck behind his marker at the back-post to poke the Cardinals ahead with a matter of minutes to play.

Although the Glovers sent bodies forward, they were unable to fashion a clear opening as Yeovil fell to a defeat.