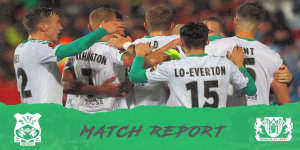 Yeovil Town extended their unbeaten run to eight games with a victory over ten man Wrexham at the Racecourse Ground.

Second-half strikes from Josh Staunton & Sonny Blu Lo-Everton ensured the green and whites secured a victory, in which every player gave their all.

Although the hosts were unbeaten at their home ground this season, the Glovers thoroughly deserved their three points, creating the better openings even when the two sides held even numbers.

Darren Sarll was forced into two changes to the side which was held at Huish Park. After an illness overnight, skipper Luke Wilkinson was not risked in the starting 11, whilst Tom Knowles dropped out after being forced off late on against Dover. In their place came Morgan Williams and Lo-Everton.

Unsurprisingly, the hosts enjoyed a lot of the ball but this largely worked in Town’s favour in the first half, who were able to sneak in between the lines, forcing corners and set-pieces on a number of occasions.

However, those in attendance were left waiting for an opening. It took until the half an hour mark for the Glovers to find a way behind the experienced Wrexham, defence. Former Wrexham man Adi Yussuf and Charlie Wakefield combined well with the latter breaking into the right channel, but when he was faced with the goal, he fired into Lainton’s gloves.

With ten minutes to go, the half’s main talking point came as Liam McAlinden was given his marching order for an elbow on Dan Moss, much to the frustration of the 8,000 strong crowd inside the Racecourse.

The final ten minutes saw the green and whites find more pockets of space but largely proved ineffective in finding a route to goal.

At the other end, Wrexham felt they had a shout for a penalty, as star signing Paul Mullin and Moss came together in the box, but the referee was unmoved.

When the referee blew his whistle for half time, neither side had really done enough to claim the lead.

However, the second half saw Yeovil look to utilise their man advantage, stamping their authority on the early proceedings. Ten minutes into the half, Wakefield almost bent one into the top corner after being found by Lo-Everton on the left flank.

With 64 minutes on the clock, the Glovers struck ahead. After Barnett’s initial free-kick was cleared, he whipped the ball back into the box where an unmarked Staunton sent a stinging effort on-goal to hand Yeovil the lead.

Looking for a route back into the game, Wrexham started to build up sustained pressure, with former Glover Ben Tozer posing a threat from his long-throws. However, Grant Smith in the Yeovil net was rarely tested, with the entire Yeovil defence heading away every ball that went into the box.

As the game entered its closing stages, Yeovil Town put the game beyond doubt. An excellent cross from substitute Alex Bradley found its way to Max Hunt at the back post, after his initial effort was saved, the ball dropped to Wakefield who saw his effort blocked. As the ball broke loose, it bounced straight to Lo-Everton who hammered the ball home sending the 102 travelling fans in attendance into raptures.

2-0 was how it would finish, as a deflated Wrexham side continued to pose little threat to a resolute Glovers side. Next up for Yeovil is FA Cup action at Huish Park.