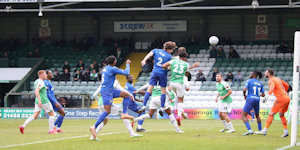 Yeovil Town were held to a goalless draw by ten-man Wealdstone at Huish Park.

It was a rather drab affair throughout, with both sides lacking the quality to unlock their opposition.

The game did switch in Yeovil’s favour following Alex Dyer’s sending off late in the first half, but ultimately it was not enough as Town who were held at home once again.

With the quick turnaround in fixtures, Charlie Lee made five changes to his Yeovil Town side. Jack Robinson, Ben Barclay, Matt Worthington, Sonny Blu Lo-Everton and Adi Yussuf all returned to the fold, hoping to make an impact in the mid-table clash.

In truth, the first half was a largely forgettable affair until the red card, with there being very few chances of note.

Town did put the ball in the back of the net in the 13th minute after Lawson D’Ath’s looping cross was bundled home by Yussuf, but the goal was ruled out for a foul on goalkeeper Sam Howes.

From then, it was the visitors who enjoyed the better of the chances and probably should’ve scored just before the half an hour mark. Clearances on the line from both Luke Wilkinson and Morgan Williams denied almost certain goals for the Stones who fired on goal from within the six-yard box.

However, the momentum flipped after Dyer was given his marching order for a heavy challenge on former Stones loanee Lo-Everton.

With a point to prove, Lo-Everton took the onus on himself to create openings, he drove forward with two minutes of the half remaining and powered an effort just wide of the post following a deflection.

When the half-time interval came, it was at a time where the Glovers wouldn’t have wanted it with Lee’s side-building momentum.

It took Town some time to get going again in the second half, with the best chance of the opening 15 minutes actually falling to the depleted visitors. The Stones hit Yeovil on the break as David Sesay got in behind and forced a save from Smith.

Beyond the hour mark is when Lee’s side began to turn the screw, but in truth, the Glovers lacked a substantial goal threat.

Yeovil’s best chance of the game fell to an unlikely candidate in Middlesbrough loanee Robinson in the 67th minute. Pinball in the box saw the ball drop to Robinson, who turned on the ball and fired narrowly wide with a first-time strike.

If the Glovers were to score, it looked like it needed to be a moment of magic. A trademark Neufville run almost saw that after he escaped his marker, but the loanee’s effort from distance flew over.

In the final ten minutes, Yeovil’s best chance fell to substitute Reuben Reid who worked space inside the box but couldn’t direct his effort beyond the Stones keeper.

That was the best it really got for the Glovers who were held at arm's length by a resolute Wealdstone side until the final whistle.