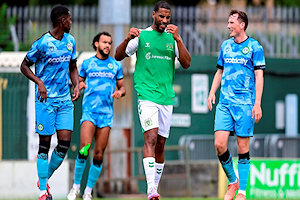 Yeovil Town fell to a first defeat of pre-season as Forest Green Rovers ran out narrow 1-0 winners at Huish Park.

There were certainly positives to take from the encounter, with Darren Sarll's side creating the vast majority of the chances, but lacked the cutting edge to make the difference in the final third.

Ultimately, Jamille Matt's first half effort was what separated the two teams at the final whistle.

Starting on the front foot, Charlie Wakefield would've felt frustrated to not open the scoring in the third minute, latching onto Reuben Reid's pass, but his touch narrowly escaped him when he rounded the goalkeeper.

Former Forest Green player Reid had the ball in the back of the net against his former employers in the 11th minute, but a handball in the build-up denied him his first goal of pre-season.

Just two minutes later, Forest Green would open the scoring, as Matt expertly guided home a cross from the Yeovil left-hand side.

Looking for an instant response, Town ventured forward from kick-off. Reid was once again involved as he failed to get a clean connection on his effort from the edge of the box, sending the ball wide.

Sarll had clearly been working hard with his players on set-plays, as corners proved an effective tool in the Glovers' arsenal. Town went closest from a corner in the 25th minute as Dale Gorman's delivery caused havoc in the Forest Green box, with Reid eventually striking the side-netting after Josh Staunton's flick on.

As the half grew on, the visitors enjoyed large spells of possession, but neither side did much to test either goalkeeper.

In the closing stages of the half, Yeovil were the team in the ascendency, being denied by the officials after putting the ball in the back of the net once again. Tom Knowles fired an effort from the edge of the box which was palmed into Reid's path. The Glovers number nine turned the ball home, but the linesman had his flag raised.

It took almost 20 minutes for there to be a chance of note in the second half, with Gorman's deliveries causing problems once again. After Luke Wilkinson attempted to poke the ball beyond the Forest Green goalkeeper, the ball fell kindly to Reid who blazed the ball over the bar, which was near enough his last action of a frustrating afternoon in front of goal.

Just minutes later, Grant Smith had to bail defender Jordan Barnett out of trouble after the former Notts County man's lofted pass asked a lot of the shot-stopper, forcing him to head the ball away.

After making a number of changes, the Glovers' momentum did not falter, with a passionate penalty appeal from a trialist after being hauled down in the box.

Ultimately, Yeovil Town were beaten by the League Two side who kick off their season next week. On the horizon for Town is a trip to Taunton Town on Tuesday evening.