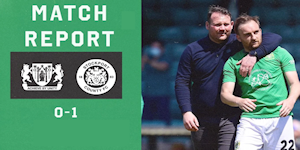 The Glovers more than matched their opponents and created plenty of chances in a thrilling encounter but were undone by a first-half strike from John Rooney whose effort proved to be the difference between the two sides.

The men in green controlled large periods of the game and produced a number of free-flowing moves but, despite pushing Stockport until the final whistle, they couldn’t find a way past the stubborn County backline.

Darren Sarll made just two changes to the side that started against Altrincham last weekend.

Adam Smith kept his place in goal, with Alex Bradley occupying the right-back role alongside Carl Dickinson, Billy Sass-Davies, and Michael Kelly in the back four.

Yeovil started on the front foot and enjoyed the early proceedings putting the away side under a lot of pressure with Simon Rusk’s side knowing three points would cement their place in the Vanarama National League play-off semi-finals.

It was the home side though that came closest in the first half, a delightful through ball out to the right-hand side from Lawson D’Ath provided Joe Quigley with a route through on goal, his right-footed effort just whistling wide at the post.

Soon after that on the run of play, Stockport County broke the deadlock, John Rooney’s deflective strike beat the stretching Adam Smith in goal, putting County into a slender lead just before halftime.

However, Yeovil responded instantly, Joe Quickley finding some space inside the box but he was unable to keep his effort down before Tom Knowles showed a great burst of energy making an attacking run into the box, but after some great trickery, he was unable to get a shot off against the stonewall defense.

The Glovers started the second half as they ended the first, with Joe Quigley latching onto a magnificent ball from substitute Jimmy Smith.

After the ball rattled the woodwork, the supporters in Thatcher's End were sure that it crossed the line, however, referee Scott Tallis had other ideas.

The entertaining nature of the game also continued with Yeovil looking rampant going forward. After a consecutive spell of corners, Tom Knowles broke free down the left-hand side but his low-driven cross could only find County captain Liam Hogan who cleared the ball away from danger.

Chances did fall for the away side, just moments after, Southam-Hales’ crossfield ball found the on-running Tom Walker, before played a neat pull-back to find Rooney on the edge of the box whose half-volley whistled agonizingly above the woodwork.

Emmanuel Sonupe was introduced for the final 15 minutes, in place of Reuban Reid to try and add that missing spark to the Town’s attack, but they still failed to find the cutting edge in the final third.