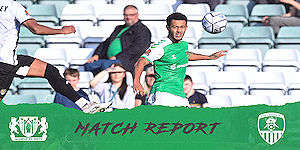 Yeovil Town were left frustrated once again as Notts County were the 2-0 victors at Huish Park.

Goals in either half from Ruben Rodrigues were enough against a Yeovil side that struggled to create clear-cut opportunities all afternoon.

Darren Sarll made three changes to the side that drew with Maidenhead United on Tuesday evening. However, the rearguard remained unchanged as Grant Smith remained in goal, whilst Dan Moss, Max Hunt, Josh Staunton and Jack Robinson lined up in the back four.

Looking for energy in the middle of the park, Matt Worthington was brought in to do just that alongside Dale Gorman. There was a debut for Luton Town loanee Dion Periera on the right flank and Tom Knowles began on the left. Sonny Blu Lo-Everton returned to the side to partner Joe Quigley.

The returning Lo-Everton has Town’s first chance of the half on 12 minutes. The Watford loanee latched onto a loose ball and drove into the Notts County half, but had his effort from distance blocked.

Notts County took the lead in the 17th minute, after the Yeovil midfield sat off, Ruben Rodrigues danced through the side and saw his deflected effort squirm beyond Grant Smith.

Looking for a route back into the game, a dangerous cross from Dale Gorman in the 21st minute was met by Joe Quigley and after a number of deflections was claimed by Anthony Patterson.

The visitors were extremely dangerous on the counter-attack in the first half, constantly looking for Aaron Nemane on the left flank. He went close on 25 minutes, pouncing on Smith’s parry but a heroic block from Staunton kept the green and whites within a goal.

In truth, chances were few and far between for Yeovil, one of the better fell after Pereira took the onus upon himself to cut the visitors open, combining well with Quigley before being hauled down in the box. The Glovers’ no.10 then latched onto the loose ball but couldn’t direct an effort beyond Patterson.

On 42 minutes, Rodrigues got away with one after clipping Moss, he then broke into the Yeovil area but seemed caught in two minds as the ball escaped his grasp.

The final chance of the half fell Town’s way in stoppage time. A pinpoint delivery from Moss was flicked on by Lo-Everton to Quigley, he then pushed the ball out his feet but couldn’t get a clean connection on his effort.

The second half started with Yeovil enjoying a lot of the ball, but the hosts were able to hit on the break, with Rodrigues almost scoring a carbon copy of his opener in the 49th minute, this time he was only able to find the away terrace.

Chances were at a premium for both sides, with the next falling with an hour on the clock. Callum Roberts was found breaking in behind on the right-wing, but his first-time effort flew wide of Smith’s post.

It took 75 minutes for a chance of real quality to fall Town’s way. After Charlie Wakefield beat three Notts defenders, Ben Seymour broke into the right channel and fired an effort on goal, this was punched into Pereira’s path by Patterson but the Luton loanee used his hand to get the ball under control.

As Yeovil were starting to build up steam, the hosts provided a sucker-punch on 80 minutes as Rodrigues headed home his second goal of the game, extending the visitor's advantage.

Despite late chances falling the way of substitutes Seymour and Wakefield, it was ultimately a comfortable afternoon for Notts County who ensured Yeovil Town’s winless run would be extended to four games.