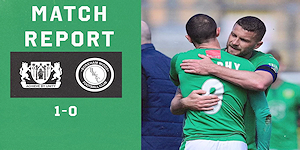 If a performance could personify Collins, it would be this one, resilient, determined and ultimately ending up with the victory.

Tom Knowles’ first-half strike proved the difference, but he and his teammates knew today was about much more important things than three points.

Darren Sarll adopted a 4-3-3 formation for the fixture. Adam Smith continued his run of playing every minute this season, with Michael Kelly, a returning Luke Wilkinson, Billy Sass-Davies, and Carl Dickinson starting at the back.

Battling it out in the middle of the park was Jimmy Smith, Albi Skendi and Matt Worthington, whilst the front three consisted of Knowles, Josh Neufville and Reuben Reid.

It's was a slow start to proceedings, with both sides looking to gain a foothold on the game.

The first chance of the afternoon took fifteen minutes to fall, as an excellent drilled cross from Skendi looked destined for Reid but a heroic flick from Tom Champion saved the visitors.

Looking for an attacking spark, Knowles began to provide it, almost finding himself through one-on-one after a deft flick to the ball away from two Wood defenders.

As the half grew on, Town looked the more likely to score, and almost did via a helping hand from Femi Ilesanmi who forced a save from his own goalkeeper.

On 28 minutes, Town’s positive attitude paid dividends. After some build-up, Worthington found Skendi who drilled the ball into Knowles' path to open the scoring. Surrounded by his teammates, it was clear to see just how much this goal meant to all associated with the club, as Knowles raised his hands to the sky as a tribute to our captain.

More efforts followed as Knowles and Worthington fired from distance, but at the break, Town held a slim advantage.

It took a while for the second half to kick into life, with Boreham Wood enjoying a lot of the ball, but struggling to do anything with it.

Those watching would have anticipated a second-half bombardment, that in truth did not materialise, with Luke Garrard's side waiting until 65 minutes for the chasing visitors to even fashion an opening of note, with Tyrone Marsh heading over from the edge of the six-yard box.

Yet, this was as much as A.Smith had to worry about, with the visitor’s long ball football offering very few opportunities for their forward line.

In contrast, Yeovil Town were just happy to run the clock down, making smart fouls and holding the ball when they could to hold onto the three points.

However, the Glovers did have opportunities, with the always bright Knowles flicking Wilkinson's free-kick back into the box and catching the visiting defences at sixes and sevens but eventually, they cleared their lines.

On 85 minutes, Boreham Wood did test A.Smith again, as Corey Whitely fired a free-kick into the bottom left corner, only for the Yeovil number one to palm the former Ebbsfleet man’s effort wide.

As legs began to tire, Sarll looked to his bench for reinforcement, with Rhys Murphy, Charlie Lee and Joe Quigley coming into the fold and effectively applying Yeovil’s game plan.

In the end, Yeovil held onto a deserved three points, on an afternoon that will be remembered far more for the context of the game, rather than the game itself.