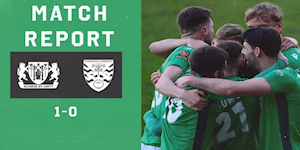 In what was Yeovil’s sixth home win in a row, the Glovers were good value for their victory, but Dagenham can feel hard-done-by not to leave with something, striking the bar in the second half.

It was an open game throughout, and a goal seemed inevitable, with Knowles’ stoppage time free kick ultimately separating the two sides come full-time.

After a memorable victory 3-1 over Weymouth in midweek, Darren Sarll opted for the same side which secured three points at Huish Park.

The midfield diamond saw Jimmy Smith continue the deeper role. Josh Neufville and Matt Worthington continued in the wider roles with Albi Skendi at the tip of the diamond.

Once again, Reuben Reid and Rhys Murphy combined up front.

With Yeovil in such good form at Huish Park, the visiting Daggers knew they needed a fast start to get something out of the game, and they did just that, thrusting the ball into the Yeovil half.

It took seven minutes for Dagenham to test A.Smith, after the ball dropped kindly to Paul McCallum, somehow Smith got across to block the former Barnet forward's effort.

Despite the visiting Daggers' positive start, chances started to fall for Town as Sarll’s side settled into the game. After some patient build-up between Murphy and Skendi, the towering Albanian eventually found Worthington in the box, but his right-footed effort was well saved by Elliot Justham.

Yet, warning signs continued at the back for the Glovers, with Worthington forced into a goal line clearance on 17 minutes.

This didn’t stop Town flying forward, with the best opportunity of the half falling in the 21st minute. This came in the form of three great chances in quick succession! After Murphy's effort was saved, Bradley followed in but once again he had his effort saved. The ball then dropped to Reid, but the forward was off-balance and couldn't direct his effort on target.

As the half progressed, both Murphy and Neufville went close, but once again Justham was equal to their efforts, as the Dagenham backline stood firm.

The visitors defending was bordering on heroic on the 33rd minute as Elliot Johnson denied an almost certain goal with Murphy lining up a first-time effort from around 15-yards out.

At the break, both sides would have felt they had done enough to score, yet it was scoreless as both teams ventured down the tunnel.

The second half began in polarising fashion to the first, with Yeovil this time in the ascendancy.

A trademark Neufville run created Yeovil’s best chance in the opening stages of the second, as he dragged an effort across goal after beating two players on his way into the box.

Yeovil’s pressure did little to dishearten Dagenham, who began to enjoy a lot more of the ball as the grew into the half.

Matt Robinson would have been left thinking, what more did he need to do, as his header came crashing off the crossbar when he was left unmarked at the back-post.

As the game entered its closing stages, it was Yeovil who were turning the screw, Reid forced another brilliant save from Justham as his effort took two deflections on the way to the Daggers goalkeeper.

With stoppage time looming, Yeovil were handed a golden opportunity to take the lead, after Callum Reynold hauled down Reid at the edge of the box and was given his marching orders.

It was always going to take something special to beat Justham in this sort of form, and substitute Knowles provided just that, hammering a free kick beyond the visiting goalkeeper to claim all three points at the death.