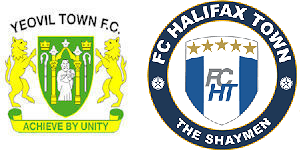 Matt Worthington was the name on everyone’s lips as he scored and was sent off in Yeovil Town’s 1-0 victory over FC Halifax Town.

Having struck ahead through the no.7’s penalty late in the first half, the midfielder received his marching orders after picking up his second yellow card with 75 minutes played.

However, defensive resilience has been a theme since Mark Cooper took the job at Huish Park, and it shone through once again, as Yeovil kept a clean sheet and ensured the three points remained in Somerset.

Cooper named an unchanged line-up from the valiant showing away to Notts County. This meant Grant Smith began in goal, with a back three of Morgan Williams, Owen Bevan & Max Hunt ahead of him. Chiori Johnson and Jamie Reckord began in the wide positions whilst Josh Staunton, Worthington and Jamie Andrews lined up in the middle of the park. Alex Fisher led the line alongside Andrew Oluwabori.

In truth, the first half lacked a spark, with both sides struggling to test the opposing goalkeeper.

The opening stages saw the visitors fashion the better chances, but they were nothing to worry Smith, who saw the Shaymen drag their attempts wide of the mark.

Yeovil’s best avenue in the first half was down the right flank, releasing Johnson who had the better of his marker but couldn’t quite find a teammate with his crosses.

As the break approached, neither team had really done enough to strike ahead, but Yeovil were gifted a penalty after some hideous defending from Halifax. Despite being warned for holding at set pieces, Bevan was hauled down in the box and earned Yeovil an opportunity to strike from the spot.

Following back-to-back penalty misses for the Glovers, it was Worthington’s turn to step up from the spot and he made no mistake, emphatically firing beyond Sam Johnson to put Yeovil ahead.

The second half saw Halifax start brighter, with Smith forced into saves by Kian Spence and Jack Senior.

The Glovers looked brightest from set plays in the second half, especially deep free-kicks. The best of these saw Andrews send a dangerous ball into the box which caused havoc, and as a Yeovil forward was dragged down, there were vocal claims for another penalty from supporters behind the goal, but nothing was given.

With 15 to go, the complexion of the game was changed as Worthington received his marching orders. After being booked in the first half, the referee perceived that he dived to win a free-kick and was shown a second yellow card. This forced the Glovers to sit in their shape for the remainder of the game, something they did excellently.

Chances did fall to Halifax, but only one was a clear goalscoring opportunity. This fell in stoppage time, after the ball was bouncing everywhere in the box, Yeovil threw their bodies on the line, the ball eventually fell to a Halifax attacker on the penalty spot, but he blazed his effort over the bar.

That was the best it got for the visitors, who left Huish Park empty-handed, whilst Yeovil celebrated back-to-back home wins for the first time this season.