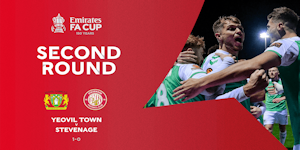 Yeovil Town completed another Football League scalp with a victory over Stevenage to secure passage to the Emirates FA Cup Third Round.

Charlie Wakefield’s second-half strike was the difference, as the Glovers became all-time non-league greats in the FA Cup, adding a record-breaking 21st victory against EFL opposition.

It was a victory that the home crowd duly deserved too, who got behind their team from the first minute to the last.

Following Tuesday’s win over Wrexham, changes were limited. Skipper Luke Wilkinson returned the fold in the place of Jordan Barnett who missed out on the matchday squad entirely due to illness. Reuben Reid made the bench for the first time this season whilst Tom Knowles also recovered in time for a spot with the substitutes.

Despite being a league below, Yeovil Town started the game the brighter of the two sides, creating the better openings. With less than a minute played, Dale Gorman, who played like he had a real point to prove, found room at the edge of the box for a shot and fired narrowly wide.

Just moments later, Charlie Wakefield broke behind the Stevenage defence and looked for Adi Yussuf who saw the ball intercepted at the last moment.

With seven minutes on the clock, two former Stevenage men combined for the Glovers. Gorman’s free-kick was met by Wilkinson who saw his header fly wide.

As the half grew on, so did Stevenage’s confidence as they began to create chances. A quarter of an hour into the cup-tie, Grant Smith was called into his first save, halting Jake Reeves’ free-kick.

Tests continued to come G.Smith’s way, but in truth, they were rarely challenging, with the Yeovil backline marshalling Stevenage very well.

Beyond the half an hour mark, chances started falling the way of the home side once again. Josh Staunton went closest to finding an opener, as his first-time effort flew a whisker wide of the post.

After an even affair, the scoreline was a fair reflection of the performances of the two sides, but the second half was a different story.

Coming out with a point to prove, it took just six minutes into the second half for Yeovil to open the scoring. After Matt Worthington pounced on Adam Smith’s loose pass, he flicked the ball onto Yussuf, who played a delicate flick to Lo-Everton, the Watford loanee then danced into the final third and found Wakefield bearing down on goal to open the scoring with a powerful finish into the bottom corner.

Now having something to protect, the Town backline defended heroically throughout. The sponsors man-of-the-match Dan Moss truly deserved that award, with a heroic block at the back post denying a certain goal, and just minutes later, G.Smith denied Jamie Reid as he burst through one-on-one.

During the closing minutes, Yeovil fans were treated to the return of Reid, who got involved in the action almost instantly. Holding the ball up excellently, he laid the ball off to Gorman who found Wakefield in the right channel, he then looked for Reid in the box but the ball narrowly escaped his grasp.

As stoppage time rolled around, G.Smith was largely untroubled as the noise inside Huish Park grew louder, culminating at full-time to wild celebrations as Yeovil Town ensured their name will be in Monday night’s draw.