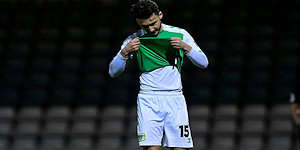 After taking the lead through Morgan Williams, they were never able to build on it, with Needham striking level on the stroke of half-time.

As neither side could find a winner, the Marketmen’s no.1 Marcus Garnham was the hero, saving the decisive penalty to send the visitors through.

Darren Sarll named a strong side as he looked to bounce back from defeat against Southend United. Grant Smith remained in goal, with Williams, Max Hunt, Josh Staunton and Jack Robinson in front of him.

The midfield saw Dale Gorman at the base of the diamond, with Matt Worthington and Jordan Barnett flanking him. Sonny Blu Lo-Everton started in the hold behind Reuben Reid and Adi Yussuf.

The Glovers came close to opening the scoring with 11 minutes on the clock, Hunt was inches away from his first Yeovil goal, sending his header from Jordan Barnett’s corner narrowly wide.

A matter of minutes later, a wayward pass from the Needham goalkeeper fell straight to Sonny Blu Lo-Everton who fired first-time from around 40-yards out but couldn’t hit the target.

On the half an hour mark, Town found a way through, an excellent lay-off by Yussuf gave Williams shooting room to open his Yeovil Town account!

With a matter of seconds to play in the first half, the visitors levelled through Ben Fowkes who pounced on Town’s failure to clear a deep free-kick.

At the break, Yeovil could be frustrated with themselves for not being in front and failed to really test Garnham throughout the second half.

Most chances that fell Yeovil’s way weren’t taken, with the best falling to earlier goalscorer Williams who saw his goal-bound effort blocked by his teammate Yussuf!

As the half grew on, the Glovers were continually frustrated, and the visitors looked tidy on the counter-attack, forcing a superb save from Smith in stoppage time.

After tasting penalty success earlier this season against Weymouth, it wasn’t to be on this occasion, as Yeovil missed multiple match point situations and crashed out the FA Trophy in the Fourth Round.