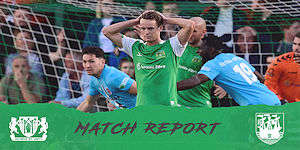 Charlie Wakefield’s early goal was cancelled out by an equaliser right at the death to force a replay at the Bob Lucas Stadium.

Helped by the lively atmosphere, Yeovil went one-nil up through a calm Wakefield finish with Weymouth later creating equalising opportunities via Calvin Brooks.

After halftime, Weymouth had more of the ball but could not create the decisive chances until Tom Bearwish got a stoppage-time equaliser following a long throw.

Darren Sarll made one change from the midweek draw against Altrincham opting for Wakefield to come into the starting XI in place of Adi Yussuf. Wakefield went into a front three joining Ben Seymour and Joe Quigley.

After an extremely lively opening ten minutes without any chances, Wakefield opened the scoring following a quick free-kick from Dale Gorman which went over the Weymouth defence and found his teammate with time in the box to slot home.

Weymouth created their best opening in the 28th minute as Brooks found himself one-on-one with Grant Smith from a tight angle, but the former Glover could only find the side netting.

One minute later at the other end of the pitch, the Weymouth defence gave Seymour space to have a speculative shot from outside the box which went deep into the Thatcher’s End.

Ten minutes before halftime, Wakefield had a shooting opportunity but selflessly laid it off to Quigley on the edge of the box for a curling effort which was brilliantly headed clear by defender Josef Yarney.

The final chance of the first half went Yeovil’s way as Tom Knowles ran down the right-hand side and created the space to fizz in a dangerous cross which Matt Worthington connected well with, firing just over the bar.

Weymouth started the second half with a good spell of possession, eventually resulting in a driven shot from Shields which was dealt with by Smith in the 52nd minute.

Three minutes later, the visitors created another shooting opportunity, this time through Brad Ash whose low effort was batted away by Smith.

With 20 minutes remaining, Max Hunt flashed a half volley on his left foot following a corner, but it flew over the bar.

Knowles was eager to make things happen for Yeovil and double the advantage. The winger worked his way to the edge of the box in the 78th minute and took the shot on his weak foot which was deflected wide.

In the dying minutes, the Terras launched a long throw into the box and substitute Bearwish was there to slide in an agonising equaliser for the visitors to force the match to a replay on Tuesday night.