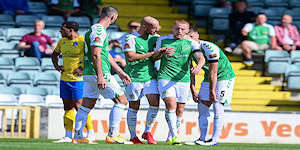 After taking the lead through a stunning effort from Joe Quigley, Matt Worthington’s sending off allowed King’s Lynn room to play freely.

Turning the game on its head, King’s Lynn scored twice in the second half to claim the points.

After a slow start to proceedings, with both sides settling into the game, the first opening came in the 10thminute as former Glover Gold Omotayo headed wide of the mark from Joe Rowley’s cross.

That chance seemed to spark Yeovil into life, after the visitors failed to clear Gorman’s free kick, the ball fell to Charlie Wakefield who saw his tame effort take a number of deflections before making its way to the Linnets’ goalkeeper.

After an opening stage which could be described as timid, Town’s opener in the 15th minute was far from that, as Quigley fired a sensational effort from 30-yards-out into the top corner to open the scoring.

Looking for a way back into the game, Omotayo found himself in the goalmouth action once again, forcing a superb stop from Grant Smith with a glancing header from the edge of the six-yard-box.

After keeping the visitors at arm’s length throughout, Town’s afternoon became a lot more difficult as Matt Worthington was sent off for going in too strongly in a 50/50 challenge.

From that point, it was one-way traffic, with Yeovil forced to feed off scraps on the counterattack and set plays.

The second half did see Town enjoy a good spell of possession in the King’s Lynn half, but this quickly dwindled with the visitors upping the pressure.

Holding firm, the ten men of Yeovil did well to limit King’s Lynn’s chances, forcing them wide on a number of occasions and winning the majority of headers in the box.

It took until the 67th minute for Grant Smith to be called into action again, as he palmed an effort from the edge of the box away from Michael Gyasi, the ball then fell kindly for a Linnets’ attacker who was heroically thwarted by Jordan Barnett, who was eventually substituted as a result of his excursion.

On the 71st minute, the pressure finally told as King’s Lynn levelled the affair, as Ethan Colman’s effort escaped Smith’s gloves and found its way across the line.

With the wind in their sails, King’s Lynn found a second, as Munashe Sundire capitalised on the green & whites’ failure to clear their lines, poking home at the back post to turn the tide.

Late in the day, debutant Adi Yussuf thought he had snatched a draw for the Glovers, but his weak footed effort from the edge of the box flew agonisingly wide.