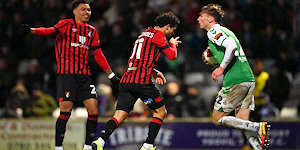 Yeovil Town’s FA Cup campaign came to an end at the hands of Championship side AFC Bournemouth.

After building a two-goal lead before the break, Joe Quigley levelled the affair against his former club to set up an exciting second half.

Despite pressing for a leveller, it was the visitors who added to their tally, securing passage to the Fourth Round.

In the opening stages, the visiting Cherries endured a physical opening to the tie, with Yeovil diving in with a number of heavy tackles, earning the Glovers two yellow cards for Gorman and Worthington.

It was Yeovil who had the first effort of the game, as Dale Gorman soured a free kick into the away terrace.

Just shy of the twenty-minute mark, the visitor's quality showed. An excellent cross-field pass from Chris Mepham released Emiliano Marcondes who beat the offside trap and placed the ball beyond Barnes.

A matter of minutes later, Bournemouth almost added a second. Jaidon Anthony’s cross caught Barnes off guard, striking the post and bouncing out into the box awkwardly.

Yeovil huffed and puffed throughout, but did little to test Nyland in truth, with the Cherries standing firm to halt any flurries forward.

With just three minutes of the half remaining, Mepham and Marcondes combined once again with the latter adding his second of the game with a calm finish.

Looking for a glimmer of hope in the opening stages of the second half, the Glovers got just that as Knowles forced Nyland into an error, sending the ball into Quigley’s path to fire into an empty net.

With the wind in their sails and Huish Park in fine voice, Yeovil kept pushing, but the resolute Championship side stood firm to the Glovers’ attempts.

Ultimately, it was the sheer quality of the visitors that made the difference, with Marcondes netting a hat-trick with just over 20 minutes remaining, pouncing on Barnes’ initial save to restore a two-goal advantage.

To their credit, Yeovil kept pushing until the final whistle, with a number of attacking changes as Reuben Reid and Adi Yussuf joined the forward line. It was those two that had Town’s best chance in stoppage time, with Yussuf finding Reid who saw his effort blocked on the line by Brennan Camp.

This would be the last action of the game, as Yeovil were knocked out of the FA Cup with their heads held high.