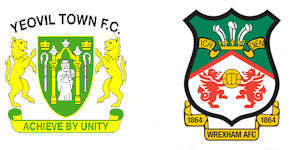 Malachi Linton made it a home debut to remember as his wonder goal secured an impressive 1-1 draw against National League favourites Wrexham A.F.C.

Following last week’s 2-1 defeat to Scunthorpe, Chris Hargreaves was forced into just one change with the injured Ben Richards-Everton missing out. Sam Pearson came into the starting 11 with Josh Staunton moving back into defence.

New signings Gime Touré and Alfie Pond made it onto the bench.

Wrexham started the stronger of the sides and took the lead after a mistake from Morgan Williams gave the ball straight to Paul Mullin on the edge of the box. The dangerous striker switched it onto his left foot before firing it low under Grant Smith.

Credit to the Glovers though who responded well to going a goal down and weren’t far off equalizing after Matthew Worthington’s whipped free kick went through a heap of bodies across the six-yard box.

Wrexham though almost punished Yeovil again, after Williams failed clearance fell at the feet of Ollie Palmer whose volley was superbly blocked by Staunton.

Throughout the game the front three of the away side caused serious problems, interchanging fluently and always looking a threat.

Worthington’s crosses were a constant feature of the first half, but nobody could find that finishing touch to draw Town level as we approached the break.

The second half started brightly, and Yeovil should have equalized when a long ball from Max Hunt was missed by ex-Glover Ben Tozer, sending Linton through, but his effort was fired straight at Howard in goal with 46 on the clock.

But Linton made up for it just a minute later as the ball fell kindly for him around 30 yards out, he then looped a half volley perfectly over Howard and into the top left corner; Yeovil deservedly level.

On 69 minutes we saw the introduction of Lawson D’Ath for Pearson who had put in a top performance, linking play really well and relentlessly pressing the away side.

Touré was also introduced to the action for his debut as he replaced Alex Fisher.

The 28-year-old was immediately involved as he gathered the ball on the left wing before beating his man and firing a ball across the box, which found Charlie Wakefield at the back post, but his effort was blocked with the goal gaping.

Seven minutes of added time gave both sides hope that they could find that winner to take the three points but in the end, they would both have to settle for a draw.

A top performance from the Yeovil players, who on another day could have snatched a win with some of the chances coming their way in the second half.