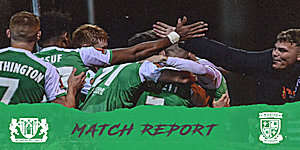 Starting on the front foot, it took just six minutes for Town to take the lead, with Knowles finding Wakefield at the back post to open the scoring. Returning the favour, Wakefield found Knowles just minutes into the second half who turned the ball home, building a comfortable lead for the hosts.

Despite both sides being blotted with late goals in recent weeks, neither were able to find one in the closing stages as Yeovil held firm, securing the first victory in six league games.

Darren Sarll opted for two changes to the side that fell to a defeat against Grimsby at Blundell Park. Knowles returned to the fold in an attacking role whilst top scorer Joe Quigley missed out with Adi Yussuf replacing him.

However, just three minutes later, the Glovers would have the lead. Jordan Barnett’s throw-in released Knowles on the left flank who burst beyond his marker and found Wakefield at the back post to fire Yeovil ahead.

Not resting on their laurels, Town almost added a second through Dale Gorman a matter of moments after the restart but a strong save from Ross at his near post kept the Cards within a goal.

For the next twenty minutes, the visitors began to grow into the game, but did little to trouble Grant Smith, with Ross continuing to be the busier of the two goalkeepers, albeit only dealing with potshots from Gorman.

From the 30th minute, Town came to life once again, imposing themselves on the Woking backline. Almost cutting Woking wide open, Worthington won the ball deep into the Woking half and played through Yussuf maybe a second too late as the visitors were able to block his attempt.

Just a matter off moments later, Yussuf did excellently to hook the ball to Knowles who looked back to his best, he put in a real shift to keep the ball in play, then finding Barnett who forced a strong save from Ross with an from the edge of the box.

With just over five minutes of the half remaining, Knowles’ long-throw was only cleared as far as Dan Moss who saw his first time effort fly narrowly wide.

At the break, Yeovil would’ve been disappointed they were only leading by one, however, it didn’t take them long in the second half to double their advantage. After a stellar first-half showing, Knowles was able to start the second with a goal that his performance richly deserved. The Glovers no.11 was found in acres of space at the back post by Wakefield, who was able to turn the ball home leading to raptures in the Thatcher’s.

With a two-goal advantage, Yeovil marshalled the game extremely well throughout the second half, limiting the visitors to very little possession in dangerous areas, and creating openings themselves.

Looking to find a third, substitute Quigley evaded some heavy challenges which saw the referee wave advantage, the towering forward was then able to find Worthington who had his effort from the edge of the box blocked with 68 minutes on the clock.

As the game entered its closing stages, Sarll’s side was pushed back a little as Woking looked for a route into the game, which they struggled to find.

However, in the final moments, Woking should’ve made it a nervy as Innih Effiong burst beyond the Yeovil defence for the first time all evening, forcing Smith into his only save of the night.

Ultimately it was a return to winning ways in the league as Town, who can go into a trip to Solihull Moors with the wind in their sails.