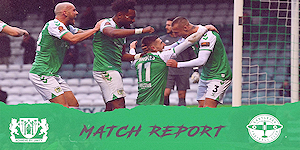 Tom Knowles second goal in as many games at Huish Park got Town up and running before Eastleigh pegged Darren Sarll’s side back in the second half.

However, with 77 minutes on the clock, Yussuf hammered an effort into the top corner to ensure Yeovil secured all three points.

Sarll opted for two changes to the Yeovil Town side which beat Yate Town to advance in the Emirates FA Cup. Skipper Luke Wilkinson returned to the starting side after a long injury lay-off, he was partnered by Max Hunt who returned from suspension.

This meant Josh Staunton was able to return to the midfield role he performed so well in during the early weeks of the season.

Looking to pick up where they left off, Town began the brighter of the two sides. Adi Yussuf won a free kick in a wide area, which was delivered into the box by Jordan Barnett who almost found Luke Wilkinson charging into the box.

The opening ten minutes saw the green and whites enjoy a vast threat from Barnett’s deliveries. Following his cleared corner, the Glovers’ no. 3 hooked the ball back into the box but Staunton could not direct his headed effort on target.

On the right flank, Yeovil enjoyed similar success. Gorman’s corner caused havoc in the Eastleigh box, eventually falling to Dan Moss who forced a heroic block from an Eastleigh defender.

In the 23rd minute, a golden chance fell for Eastleigh. The visitors beat the offside trap and played the ball across goal, but somehow Tyrone Barnett could not get a touch to turn the ball beyond Grant Smith.

Knowles had to grow into the game from an attacking perspective and forced a save from Joe McDonnell at the half an hour mark after receiving the ball from Charlie Wakefield at the edge of the box.

With just minutes to go in the half, Knowles was found in acres of space following a brilliant pass from the retuning Wilkinson. He needed no invitation to shoot and found the top corner to earn Town a deserved lead going into the break.

The opening stages of the second half saw neither side take the game by the scruff of the neck, with both sides enjoying their fair share of the ball.

A good delivery from former Glover Tom Whelan created the first chance of the half just before the hour mark, he found T.Barnett at the back post who spurned his header.

It took until the 61st minute for Yeovil to create an opening in the second half, after the ball bounced awkwardly for Yussuf, he did well to get the ball out of his feet and strike, forcing McDonnell to save down to his right.

With 69 minutes on the clock, Eastleigh levelled the affair as Harry Pritchard bundled the ball home at the far post.

However, this lead lasted less than ten minutes, with Yeovil scoring again in a spectacular fashion. Substitute Quigley flicked the ball into Yussuf’s path who hammered the ball into the top corner on the half-volley to restore the Glovers’ advantage.

In the closing stages, the visitors threw bodies forward-looking to salvage a point, but Yeovil stood firm, with a number of heroic blocks, most notably from Morgan Williams ensured the three points were to remain at Huish Park.