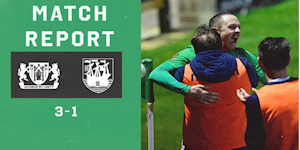 Rhys Murphy stole the show as Yeovil Town completed the double over Weymouth at Huish Park.

After taking an early lead through Murphy, Yeovil were penned back by Weymouth as they struck against the run of play.

Coming out the traps in the second half, Murphy scored twice more to complete a memorable night for the Yeovil Town number nine.

Darren Sarll kept the diamond formation that has helped the Glovers improve their form in recent weeks.

Adam Smith began in goal, with Alex Bradley, Max Hunt, Billy Sass-Davies and Carl Dickinson starting at the back.

The midfield diamond comprised of Jimmy Smith at the base, Josh Neufville and Matt Worthington in the wide positions and Albi Skendi at the tip. Murphy and Reuben Reid combined up front.

Murphy has had an instant impact in his last two appearances at Huish Park, and he managed more of the same when starting against the Terras. After Neufville’s cross was spilled by Ethan Ross in the second minute, under pressure from Reid, Murphy needed no invitation to strike Town ahead from close range.

The advantage could have been extended in the early stages on. Multiple occasions, with the best chance falling to Skendi on 17 minutes as he burst beyond the Weymouth defence, but this time Ross was able to turn the ball wide.

Against the run of play, Weymouth equalised in the 23rd minutes as Jacob Mensah turned home a free kick to turn the game into a contest.

After scoring, the visitors sparked into life, enjoying the better of the chances as Jordan Ngalo forcing a great save from A.Smith after drilling an effort into the bottom corner.

Yet, as the half progressed, Yeovil steadied the ship, with the game finely in the balance at half-time.

The second half saw the Glovers come out the traps fast once again, forcing the game onto the young backline. Ultimately this pressure would pay dividends in the 53rd minute, after Reid’s initial header was saved, Murphy pounced turning the ball home to regain the advantage.

The Arsenal academy graduate wasn’t done their either, with 82 minutes on the clock he completed his hattrick. After missing a 1v1 moments earlier, he was played through by substitute Tom Knowles and hammer an effort off the post to become the first Yeovil player since Brian Grey to score three times in the derby.Y