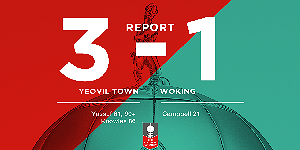 Yeovil completed a turnaround against Woking to progress to the FA Trophy fourth round thanks to late goals from Adi Yussuf and Tom Knowles.

The visitors took the lead in the first half through a nice finish from former Yeovil man Tahvon Campbell.

In a game of few chances, Yeovil turned the game on its head in the final ten minutes with two goals from Yussuf either side of a Knowles header.

Darren Sarll made four changes from the Barnet victory with Max Evans, Reuben Reid and Alex Bradley making their first starts of the season and Jaheim Headley making his Yeovil debut.

The first shot of the game came after seven minutes when Dale Gorman had a shot from distance, but the midfielder’s effort deflected out for a corner.

Max Kretzschmar had a low shot in the eleventh minute which beat Evans but trickled just wide of the far post.

A Woking corner in the 19th minute caused chaos in the Yeovil box with unconvincing efforts to clear the ball ending up hitting the crossbar, but eventually, the ball found safety

The Cards took the lead in the 22nd minute after Campbell was released by Tommy Block, and the former Glover finished expertly past Evans.

It was a half of few chances for Yeovil, but Sonny Blu Lo-Everton created something out of nothing in the 44th minute but his shot was well saved.

Gorman attempted a fierce free-kick from a tight angle which forced an outstanding save from Ross to tip it past the post.

Finally, Yeovil’s second-half pressure came to fruition in the 80th minute as substitute Yussuf drove a powerful finish home in front of the Thatcher's end to equalise.

Yeovil completed the turnaround in the 87th minute as Lo-Everton ran down the wing and crossed invitingly towards Knowles who headed in for the winner.

Yussuf made sure of the victory with virtually the last kick of the game as Knowles passed to the Tanzanian who was one-on-one with Ross and finished perfectly.