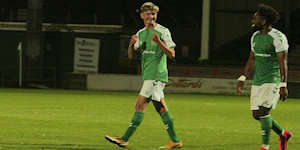 Finlay Skiverton capped off a successful evening in the Somerset Premier Cup as Yeovil Town were the 4-1 victors at Huish Park.

Despite going a goal down with one minute on the clock, Town bounced back through Morgan Williams’ first goal in green and white.

The second half saw the floodgates open with Sonny Blu Lo-Everton, Adi Yussuf and Skiverton building a comfortable advantage with the Glovers duly deserved.

As expected by many, Darren Sarll made nine changes to the side which was defeated by Chesterfield in National League action. Max Evans was given his first start in goal, whilst Max Hunt, who captained the side, retained his place partnering Williams at the centre of the defence. Jack Robinson made the first start of his loan move at left-back with Yeovil Town Elite Player Development Programme student Jake Graziano starting at right-back for his debut.

Toby Stephens and Matt Worthington combined in the midfield pivot, with SLo-Everton ahead of them in the no.10 role. EPDP student Oliver Haste made his debut on the right flank whilst Alex Bradley made his first Yeovil start on the right of midfield. Yussuf started up front after his lively cameo on Saturday.

Bridgwater caught Town off guard in the first minute to claim the lead with a free-kick from around 30-yards catching Evans off guard to open the scoring.

That was the best it got for the visitors, who were then relentlessly pressed by a youthful-looking Glovers side.

On 28 minutes, Town’s pressure told as Hunt found himself deep into the Bridgwater half, Yussuf met his cross which cannoned off the crossbar, with Williams reacting first to turn the ball home.

Just before the break, Yeovil should’ve had a second, after Bradley’s free-kick was met by Hunt but an acrobatic block denied him a first goal in green and white.

After the interval, Town came out with real conviction looking to take the lead, and they should’ve done in the 62nd minute as Lo-Everton burst through on goal, however, his effort was saved by Jake Viney.

Making up for his earlier miss, Lo-Everton made no mistake just two minutes later, this time on the opposite flank, the Watford loanee made his mark on the game with a cool finish to put Yeovil in front.

EPDP student Haste thought he had added a third just beyond the 70th-minute mark, but his placed effort was cleared off the line by Bridgwater.

The 74th minute brought a special substitution, as F.Skiverton, son of club legend Terry Skiverton, was brought on for his Yeovil Town debut.

Yussuf added a third with just over ten minutes of the cup tie remaining, as he hammered the ball into the top corner following Robinson’s well-weighted pass.

In the dying embers of the game, Skiverton made his presence known on the fixture, scoring on his debut with a well-taken finish to put the result beyond any doubt.