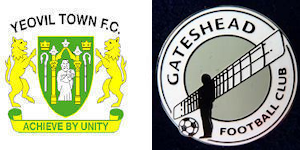 Yeovil Town returned to winning ways with a 3-1 victory over bottom of the league Gateshead.

Alex Fisher was the star of the show as his two goals turned the game around for the Glovers.

Goals have been at a premium at Huish Park this season, but one fell for each side in the first half.

After a timid opening, Gateshead struck ahead with 25 minutes on the clock. Despite shades of offside, Will Harris broke through and slotted the Heed ahead.

The goal seemed to kick Yeovil up a gear, forcing the ball forward at every opportunity.

Chiori Johnson was a consistent outlet for the Glovers throughout, and Yeovil’s leveller came from a free-kick he won with just over half an hour played. Anthony Georgiou’s free-kick was met by Fisher who flicked the ball home.

Minutes later, Fisher thought he had found his second goal of the afternoon, but the linesman had his flag up for offside.

As the half progressed, it was Yeovil who were the team in the ascendency, with Johnson and Oluwabori in particular combining well down the right flank. The best chance the two created saw Oluwabori sent through the right channel, but James Montgomery was equal to the Peterborough loanee’s shot from an acute angle.

The second half saw Yeovil start fast, instantly setting the tempo with Johnson cutting inside and firing on goal within the first 90 seconds.

It was no surprise when the second Yeovil goal came from Johnson’s great work. His cross escaped Montgomery and fell straight to Fisher who powered home his second of the afternoon with 51 minutes on the clock.

15 minutes later, Fisher was gifted a golden opportunity for his hat trick after a foul in the box. He stepped up from the spot but sent his effort both high and wide.

Almost snatching something out of nothing, Gateshead’s one real chance of the half almost ended in a goal. The ball dropped kindly to Harris again, who this time spurned his 1v1 chance.

Even though Gateshead controlled more of the ball in the closing stages, this suited the Glovers who continually looked dangerous on the break thanks to the fresh legs leading the line.

In the dying embers, Linton was able to wrap the game up. As Gateshead sent bodies forward, the Yeovil no.14 was the coolest man in the stadium, finishing beyond Montgomery to ensure the three points remained at Huish Park/