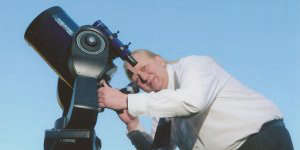 Last week I talked about a waxing Gibbous Moon - waxing because it was getting brighter as it headed towards a Full Moon. Now we are past the Full Moon, it appears as a waning Gibbous Moon.

If you go outside around 5am on Wednesday 12th, a 94%-lit waning Gibbous Moon will be towards the south west, with planet Uranus a little above it and to the left. Uranus will have a magnitude of about +5.6, so in theory at least, it could just be visible with the naked eye from a very dark location, BUT there will be light pollution from the Moon meaning that you should really dig out those binoculars or a small telescope.

There are several interesting astronomical events coming up later this month, including the Orionids meteor shower and a partial eclipse of the Sun, but for now I am going to make another blatant advertisement for the two astronomy lectures and star parties that I am running at the Ham Hill Visitor Centre. They are taking place on Friday 21st October and Friday 18th November, with a talk at 7pm, followed by refreshments at 8pm before we venture outside to have a look at the night sky.

Booking is essential as places are limited and you can do this via the www.visitsouthsomerset.com website or by following the link at www.starsoversomerset.com