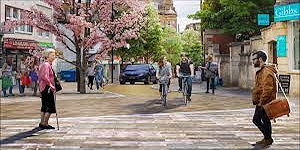 The Yeovil Refresh scheme will see public spaces in the town centre transformed with a water feature, wider pavements, the pedestrianisation of the Borough, a bus gate, and an amphitheater and outdoor TV screen in Lower Middle Street.

The Government has given a grant of £10 million for a project to improve Yeovil town centre.

The money has come from the government’s Future High Street Fund and is aimed at making Yeovil town centre a more vibrant place to live, work and shop.

Leader of South Somerset District Council, Val Keitch said Yeovil Refresh would deliver an ambitious programme that would bring positive and lasting change to the town centre, guided by what local people wanted to see.

The six areas that will see change are:

The Government funding could also be used to develop the former cattle market site off Reckleford, and Glovers Walk in Yeovil.

For more details go to southsomerset.gov.uk/yeovilrefresh